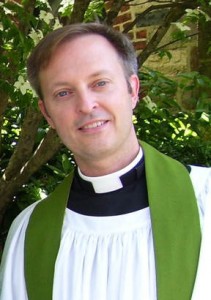 The Rev. J. Randolph Alexander, Jr. (Randy) served as 14th Rector of Christ Church from 2000-2013.  He was called in 2013 as Rector of Immanuel-on-the-hill Church in Alexandria Virginia. tenth Rector.   During his thirteen years at Christ Church, he also served as a Trustee of the Diocese of New York, a member of the Disciplinary Board, and a member of the Congregational Support Plan Committee.

He is married to the Rev. Patricia Phaneuf Alexander, a 2001 graduate of Virginia Theological Seminary, who is currently Chaplain to the Upper and Middle Schools at St. Andrew’s Episcopal School in Potomac, MD. The Alexanders have three sons:  William, Peter, and Andrew, and two feisty dogs.  Fr. Randy is a student in the Doctor of Ministry program at Virginia Seminary, and he serves our Diocese as Chair of the Committee on Priesthood, a member of the Commission on Ministry, a member of the Standing Committee, and a Deputy to the General Convention of the Episcopal Church.