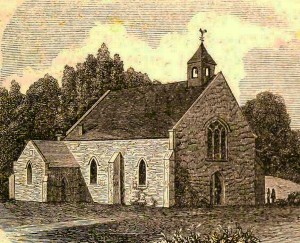 Christ Church was founded and built in 1843 and is the first house of worship in Pelham.  Our founder was the Rev. Robert Bolton, who served as our first Rector.  Today, the Rev. Matthew Hoxsie Mead serves as our fifteenth Rector.  In between, the original church was expanded, new buildings were built, the Garden of Resurrection was established, and the church merged with its daughter congregation in North Pelham to become the Parish of Christ the Redeemer.

We have a rich history begun by the Boltons and built upon by succeeding generations.

Please read more and learn about our history and architectural treasures, and familiarize yourself with our wonderful buildings which have been the spiritual home for countless Episcopalians since 1843.

BEGINNING WITH THE BOLTONS

Our parish’s worship of our Lord Jesus Christ takes place today in a church building that was built in 1843 of native granite.  Christ Church was the culmination of the dedicated efforts of its first rector, the Rev. Robert Bolton.

Robert Bolton was born in England, emigrated to the United States, and eventually settled in Pelham.  He served as Rector of historic Saint Paul’s Church in Eastchester.  Saint Paul’s is now located in Mount Vernon – the building did not move, rather the city and town lines and boundaries changed over time.  Bolton saw a need for an Episcopal Church in Pelham.  On April 28, 1843, the cornerstone of Christ Church was laid – you can read Robert Bolton’s address on this occasion to the fledgling congregation.  On September 15, 1843, Christ Church was consecrated by the Bishop of New York, and on September 25, 1843 the church was officially incorporated as an Episcopal Congregation in New York.

Bolton had five sons (each became Episcopal priests) and eight daughters. Two of the Bolton sons, William Jay and John, were artists who contributed directly to the architecture and artistry of the church.  William Jay was one of the premier stained glass artisans of his time and created many of the stained and painted glass windows in the church, including The Adoration of the Magi, which is believed to be the first figured stained glass window made in America. William Jay and John also constructed the side altar, reredos, and altar rail. The brothers carved and painted the corbels, which sit at the base of the rafters.

By the early 1970′s, it had become clear that the town of Pelham could no longer support two Episcopal parishes. After prayerful consideration by both congregations and both vestries, a decision was made to become the united Parish of Christ the Redeemer. Christ Church was selected as the house of worship and the property of the Church of the Redeemer was turned over to the Town of Pelham to be used for a municipal hall, a center for senior citizens and a child care facility.

The Bolton family moved away from Pelham long ago, but their legacy remains.  Their stately manor home, known to this day as the Bolton Priory, sits a few hundred yards from Christ Church on Priory Lane and one street away from Bolton Street.

RECTORS OF THE PARISH OF CHRIST THE REDEEMER

BUILDING UPON A BLESSING

John Bolton’s six immediate successors served an average of about three years each and aside from Cornelius Winter Bolton, who later served as Rector of the Church of the Redeemer, very little is known of them.  The Bolton family continued to take an active role in the Parish – Anna Bolton played organ at Christ Church for many years, and the 1870 building adjacent to the Church was named after Nanette Bolton.

The Rev. Charles Higbee served as rector for over 20 years and began a trend of long rectorships and stability that has lasted into the 21st Century.  Under his leadership the UNDER CONSTRUCTION (1-9-19)

We have had fifteen Rectors.  Please click here for information on our rectors.