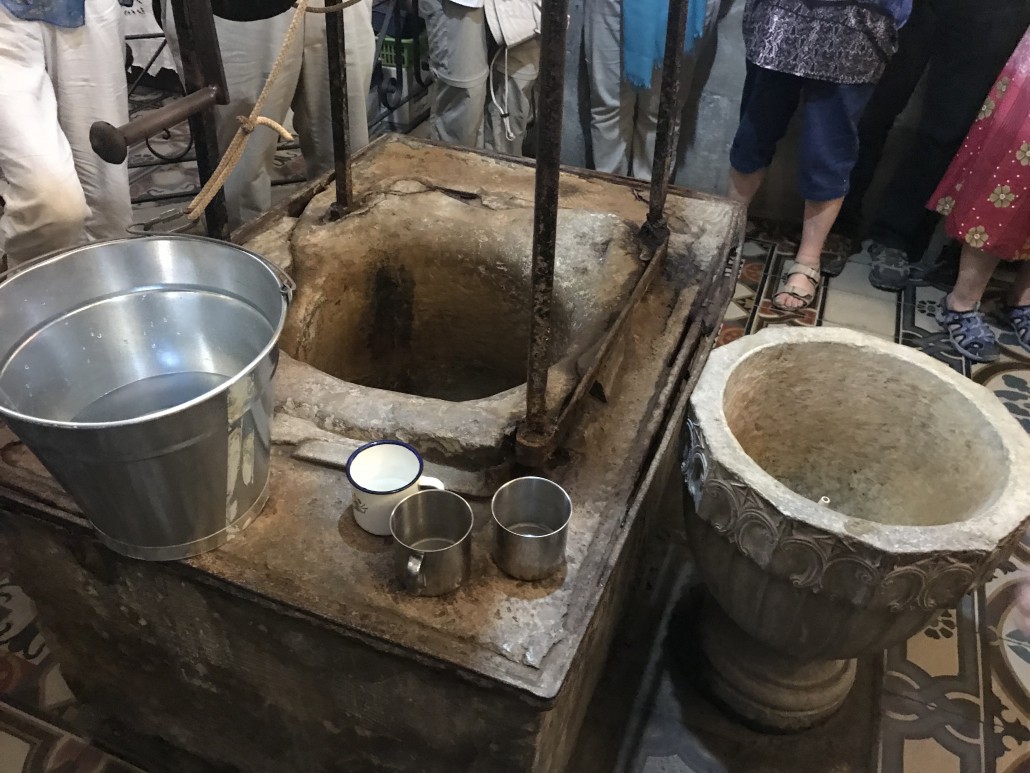 We left Nazareth at 7am and headed back through the West Bank. I started with a prayer for the stewardship of creation (see yesterday’s post to see why). It was ironic and yet not surprising that our trip back south would feature the single largest waste management failure I’ve ever witnessed. The garbage issue aside (and I will detail some of that below), today was an amazing day.

We first visited the Church of the Ten Lepers. This is where Jesus healed ten lepers. The church is built on a cave and cistern that is remembered as being a refuge for lepers in Jesus’ time. This Orthodox Church was a gem. We prayed prayers of healing for people in our lives. I won’t share my prayers with you all this post, but I felt the Holy Spirit moved in a powerful way in this place. After our brief service we were treated outside to coffee hour! Turkish Coffee and biscuits in a shady garden was a just what we all needed. It reminded me of home and the importance of simple hospitality.

We next drove through Nablus. We entered town through what was obviously a regional dump, garbage trucks and dump trucks were dumping trash as we drove by. Yet, the dump never really ended. On the side of the road there were piles of trash that had obviously been dumped by garbage trucks that dropped their loads before getting to the actual dump. Our lunch conversation revolved around how it was possible that none of us had ever heard a word about the garbage issues in Israel and the West Bank. This is the Holy Land, and yet the land is disrespected in a way that is hard to fathom.

After we had left the dump section of Nablus behind us we headed up Mt Gerizim (which is in Nablus). This part of Nablus was a pretty little city with one of the most amazing churches in the world.

The Greek Orthodox Church of the Samaritan Woman. The church has an amazing history. In the basement is Jacob’s Well, the same well that the Samaritan woman was at when Jesus entered this town. I haven’t had time to check the tradition with archaeological records, but the fact that the church has been built above this well since Byzantine times and that fact that the well is still functional lend credence to the tradition. We gathered at the well, drank from it, and met the bishop who lives in the church / cathedral. He is an icon maker of the highest level, and he wrote many of the icons in the church. He also oversaw the building of the church when it was destroyed. The church has been bombed in recent years (there is a remnant if that explosion on the steps to the well. The priest before him was murdered by a Settler with an Axe, who wanted control of the well. The current bishop tracked down the murderer, was stabbed twelve times, and finally captured him and handed him over to the authorities. The priest who was murdered was canonized as a martyr by the Greek Orthodox Church. His tomb and an icon remembering his death (written by the bishop) is in the church. The ancient and modern history here was astounding.

The Bishop blessed me while I was there. He also anointed my hands with oil, which is customarily done at the ordination of a priest but was not done to me when I was ordained (that practice fell out of favor in our diocese in the 2000s – I don’t know if it has been revived.). I was grateful and, literally, blessed to be in his presence and have my hands (finally!) anointed by a bishop.

Our next stop was Tybei which is a Christian city in the West Bank. There is a brewery there, and we stopped to tour the brewery and sample some beers. My kind of pilgrimage! The beer here was excellent. They make a great White Ale and a malty IPA. Their stock beer is a Golden Lager which is great too. Of course any purchases here help the local
Christians, so I bought a T-shirt.

Tybei has a ruined church dedicated to St George St George is a very big deal all over the Holy Land. The ruined church is the site of numerous local rituals celebrated by Christians that seemed to me a tad “out there”. There were hooks and splattered blood on the ground from a recent animal sacrifice. There were fire pits and charred areas. It was a place unlike anything I’d seen in the Holy Land.

We made our way back to Jerusalem and for the first time in our trip we had some actual free time. Bob, Eero, and I took the opportunity to return to the Old City. I had numerous gifts that I wanted to properly Annointing and Bless on the Annointing Stone at the Holy Sepulcher. Eero was in search of the ideal Jewish housewarming gift. Bob wanted to go back to the Wall. We did all three and metvfor a beer in the Jewish Quarter. It was a splendid few hours. Returning to the Holy Sepulcher and the Wall increased my love for each place. Prayer here is different and easy.

Our evening concluded with a Speaker who provided a perspective on Jewish issues. It, like all of the speaker events, was excellent and eye opening.

Day 7 (Tuesday) – The Sea of Galilee Day 9 (Thursday) – Stations of the Cross, Emmaus, and the Dead Sea
Scroll to top