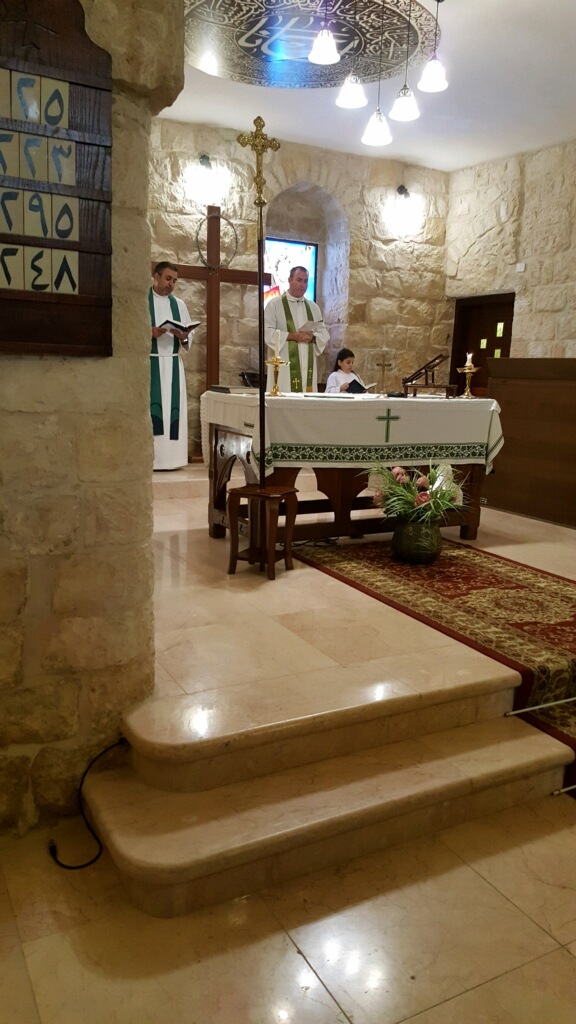 Our day began by going to Gethsemene – the place/garden where Jesus prayed after the Last Supper and where he was betrayed by Judas and arrested. This is one of many sites that is overrun by tourists and pilgrims, so we arrived at 7am – before our Sunday Eucharist.

The church is known as the Church of the Agony and also as the Church of All Nations. It is rebuilt in 1924 on the site of several churches built on the site dating back to 379. The current church is a stunning mix of modern (many nations helped fund it and there are mosaics referencing each of these nations) and ancient (the floor is a duplicate of the church that was built in the 11th century – the original floor stonework can be seen through a “window” in the floor). The main feature is exposed rock around the altar. The garden outside has a grove of olive trees that date back 800 years.

Prayer here this morning was easy, and that was a blessing. I put my hands on the rock in front of the altar for several minutes and prayed. For reasons that I cannot explain, my prayers here have been for my wife, my children, my sister, my mother, and my congregation. In particular, I have offered intense prayers for the women in my family. Our story starts with a woman, Mary, and I’ve been guided to pray for the women in my life while I am here. This morning was no exception. I was grateful for the extended time for prayer this morning, it jump started my day.

We hopped on the bus and headed toward Ramallah for the Eucharist. You may have heard of Ramallah. It’s the capital of the Palestinian Territories. It is often shown on American TV as a bit of a war zone. We passed the checkpoint and drove into a city that was clean (litter has been a significant issue everywhere, but downtown Ramallah was mostly litter and graffiti free) and full of growth and life. The traffic leaving Jerusalem was apparently quite light and so we had an extra half hour of free time before church… so we visited Yaser Arafat’s tomb. Arafat was the leader of the Palestinians for many years. Things I learned about him on this day. His wife was an Arab Christian. He wrote several laws that mandated that Palestinian towns that had a Christian presence (Bethlehem, Ramallah, Beth Sahour, etc.) must have Christian mayors to ensure that the Christian minority’s interested were represented and advocated for. The tomb was monumental – see the photos. He hope was that he could be buried in Jerusalem but that was not possible. I never, ever thought I’d visit Arafat’s tomb. But traffic was light and I learned something I didn’t know.

Our bus dropped us off downtown Ramallah. The weather was beautiful (again!) and so we stopped for ice cream before the 10:30 am Eucharist. A few people in our group took the opportunity to shop for necessary tech cables (Android and Apple chargers and adapters) at a neabby tech shop. I never expected to eat ice cream in Ramallah, nor did I expect one could find a tech shop that has everything our group had been searching for for five days in Jerusalem.

We headed down a hill to St Andrews Anglican
Church. We were invited in and informed our worship would be in English and Arabic (Arab Christians speak and worship in Arabic). The priest (Father Fadi Dia) came in a few minutes early and asked if I wanted to vest and participate as a priest. I jumped at the opportunity. He took to the Sacristy, loaned me an alb and stole, and quickly went over what I would do and what he would do. He then asked, “Do you want to preach?” Now, part of me thought that would be awesome! But I hadn’t even read the readings in advance and I hadn’t prepared a sermon… and I didn’t speak Arabic. Mostly though, I thought that I needed to hear his sermon. I was in his church and though I appreciated the offer very much, I think he and the congregation had already been more than hospitable by letting us read a lesson, letting me be involved in the service, providing English translations, and instructing our entire group to site up front while the regular parishioners sat behind. Preaching would have felt like we were taking over, and that didn’t feel right.

Serving as a priest at the altar at St Andrews in Ramallah will forever be a highlight of my priestly experience, and I will share only one story. During the Eucharistic Prayer (which we read in tandem) I was astounded (in the best way) when I prayed and gave thanks for Jesus who suffered HERE in Jerusalem. Here in Jerusalem. Here. Less than ten miles away from where I was celebrating the Eucharist, Jesus had died and risen from the dead, and the prayer casually noted that geographic reality because it was true. If you want to know why Christians visit the Holy Land, this Prayer summed everything up in one word: here.

After church concluded we had Turkish Coffee and Ice Cream. I’ve been to some great coffee hours in my day, and this was as good as any of them. The people of St Andrews were marvelous examples of Christian hospitality, and I will keep Fr. Fadi and his congregation in my prayers and forever remember the ways they blessed me that day.

After church we headed out of Ramallah to a neighboring town for the most over the top Middle Eastern lunch ever. Endless meat, endless salads, endless dips, endless veggies, and crazy hot peppers! I’m still stuffed. We had a single, gigantic table that we all sat together at. It was amazing.

Our day concluded back in Jerusalem with a walk down the Mt of Olives – mirroring the Palm Sunday walk. We passed numerous Jewish cemeteries, had a perfect view of the City, Temple Mt, Dome of the Rock from across the valley, and stopped at the Dominus Flavit Church (our Lord Wept over Jerusalem). The church has a great view of the city and is the traditional location where Jesus lamented over Jerusalem, as a hen over her brood. There is a great chicken icon on the altar.

Monday will bring an early departure to the desert and then a few days in Nazareth.

You can view Day 5 photos here. Please forgive the typos, I’m working on my iPhone.