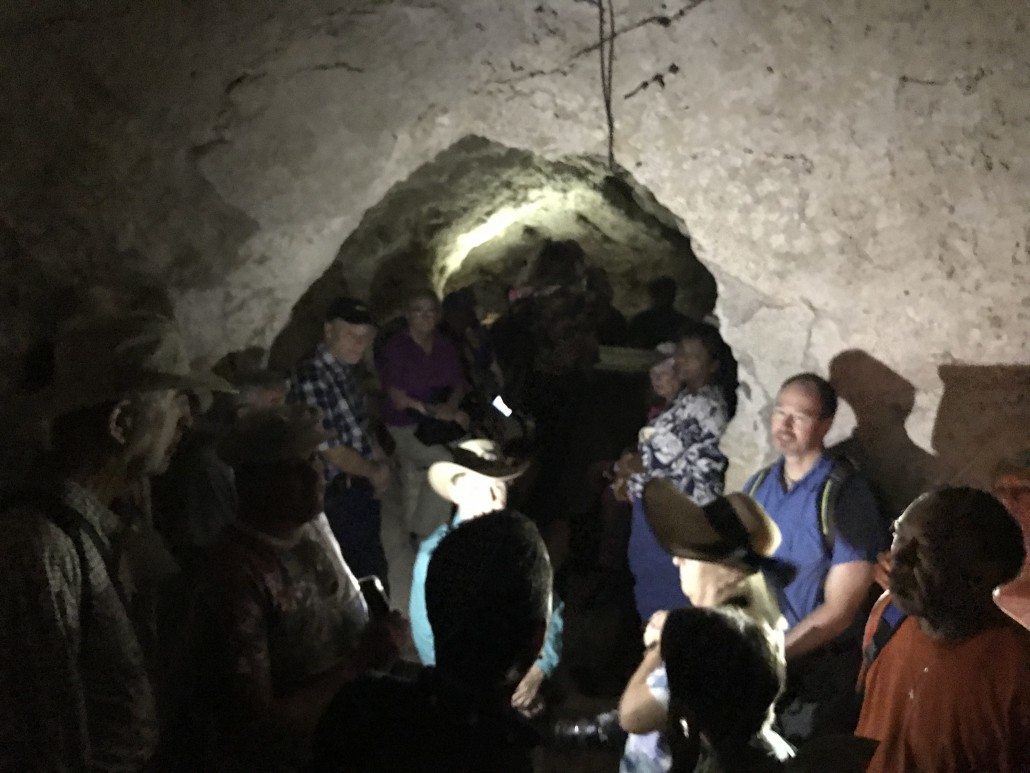 Today (Saturday) we went to Bethlehem.

Bethlehem is in the West Bank. This was the second time we went into Palestinian Territories. This is no small thing. You cross a checkpoint. You pass into an area flanked by ominous red signs. There is a (quite new) 30 foot wall surrounding the area territories. Basic utilities services change. Even ATT recognizes a difference: my cell phone notes that I am in Palestine, rather than a “Partner” network and the rates change. Most of us get a text noting this switch. The photos (link at the end of this post) give you some idea of the wall and signs. For pop/social justice/art fans, Banksy graffiti is omnipresent. I’ll post more about this reality in a later post.

Bethlehem is 7 miles outside of Jerusalem. Basically a suburb today, but it is historically the hill country surrounding the city. Our first stop today (after the checkpoint) was Boaz’s Field/Shepherds’ Field. We exited the bus and were greeted by a herd of salesmen. Markets, outdoor salesmen, and such are a reality everywhere in the Holy Land. Bartering and haggling (and avoiding getting fleeced or pickpocketed) are part of the daily fun, and to be clear there is some great stuff to be had – as well as trifles and tidbits. Today’s sellers offered beautiful clothing and appropriate souvenirs.

We made our way past the mini-market to a small church. There was a large group of Christian Pilgrims from Senegal who had arrived before us. We made our way past them and down the hill where we found the entrance to a cave. The history of this area predates Jesus. Bethlehem is David’s city and so we read about David’s grandmother Ruth and hiw she met Boaz. After the background our group 43 including our guides) entered the cave/dwelling. Many of the dwellings in the hill country 2000 years ago were actually underground caves, and it is believed that Jesus was born in such a place.

Forty people can actually fit pretty easily in such a tight place, but I think I was not alone in feeling a bit claustrophobic. The cave dwelling was less “in” and more “down” requiring our group to go a dozen steps down into an anti chamber and another half dozen steps into the sleeping and living area. When everyone was inside Iyad provided background in this type of dwelling or gather space. We then read the Nativity Story. I offered a prayer, and then we sang Christmas Carols, in the dark, in a cave (with no lyric sheets or accompaniment). O Little Town if Bethlehem and Away In A Manger (we actually sang both tunes all the way through). We then prayed for refugees and families and children, children (in particular our own), grandchildren, and peace. Christmas carols in a cave in Bethlehem in August will forever be part of my Christmas memories.

We exited the cave and climbed back up the hill to the church. This is NOT the Church of the Nativity, but rather it is the Church in the Shepherds Field. The church was built in honor of the Shepherds and the Angels who proclaimed the birth of Jesus to then by singing Gloria in excelsis. We went inside and sang… you guessed in “Angels we have heard in high”. We did have a lyric Sheets for this. Randy and Jeff and I felt, since we were Episcopalians we should (and could) also sing an actual Gloria, and so we sang the Mathias Gloria (without lyrics – we all knew it). There is video of both songs, and I’ll post it on FB.

We next went shopping. I find it funny that our trip to Bethlehem included an abundance of singing and shopping. Once our wallets were a bit lighter and our supply of gifts for loved ones was heavier, we toured the actual town and it’s recently added walls. I’ll post more about the walls later, but the photos and the graffiti on the walls tells a fair amount of the story.

Lunch in Bethlehem at Ruth’s was amazing. I could eat The local salads, spreads, and meats forever, but today featured the best falafel I’ve ever had.

After lunch we headed up the hill to the Church of the Nativity.

The church is another built by Helena on a spot that was formerly occupied by a Roman Temple over the site recalled by locals (with bitterness that a organ Temple was on that particular site) since at least the second century. The original church was was built in 339 and torn down in 529 and replaced with the current building (which has undergone significant renovation and expansion over the past 1500 years. Under the Church is the cave shrine which commemorates both the birth spot and the manger location – again recalled since at least the 2nd century which is about 50 years after the Apostolic age.

The church today is undergoing significant restoration and looks like a construction site. There is tons of ugly graffiti on the construction material (“Bill was here, 2017” – that sort of thing), which has unfortunately drifted into some of the architectural elements. There was a sign on a 1500 year old column with a sign on it which read “Please don’t write on the columns.”

The line to get to the birth and manger shrine was long and sauna-like. Our weather has been perfect this whole trip, but the interior of the Church of the Nativity was sweltering. We waited for nearly an hour to get to the shrine, which was downstairs, and even hotter.

This shrine, very much like the Holy Sepulcher tomb and Calvary was a mix of an intense, brief, holy blur mixed with a mass of humanity. I have found on this trip that that reality is as good an analogy of the mystery of the Incarnation. Jesus is fully God and fully human. We get humanity. It’s messy, intimate, loving, annoying, and everything in between. We struggle to perceive the divine. We have mountaintop moments (the Nativity is on a mountain) that we can’t hold on to and can never adequately describe or explain. We see and find God in strange places but can not control or confine those moments. St. Peter said at the Transfiguration: “Lord it is good that we are here”, and he wanted to buikd tents to maintain the mystical moment, but it ended. Jesus led them down the mountain and asked them not to tell anyone what they had seen… and even when they did their story of what happened barely does justice to what they must have witnessed. The same is true with some of these Holy Sites. In our group of 41 nobody has “gotten” the spark in every site, everyone has been walloped by the Spirit somewhere, and yet everyone has noted with some frustration how annoying “tourists” can be and also noted with joy the depth of faith seen in the thousands of pilgrims around us. So… the humanity is easy to see, and the divine is more of a challenge. I think if we really digested the Nicene Creed each week, we’d probably feel the same way about it as these holy sites.

The Church of the Nativity was a place that St Jerome found God. So much so that he lived there for many years, built a monastic community, translated the Bible into Latin (the Vulgate), and is buried there. His tomb and chapels in his living quarters are right next to the Nativity Shrines. I believe Jerome lived there for 36 years. Who knows how many times he has a mountain top moment on that mountain, but it is worth remembering that he – apparently more so than many of us – was grouchy and constantly bothered by the presence of most other people. I find that humerous considering the Church of the Nativity was a major pilgrim destination in his day too!

Our day concluded with a grand dinner at the guest house. Our group has officially bonded. Rather than sitting in groups of four or six, we ended up continually adding tables and chairs to an ever growing table. When the space would no longer permit such a table, we turned the corner and ended up eating together (all of us) in a single giant L shaped table. The presence of the Spirit was palpable – the before-meal-grace by my father received applause! So perhaps spending time with people and growing in relationship allows us to find God.

Photos are online here. Typos will get corrected eventually – I am afterall working on my iPhone.