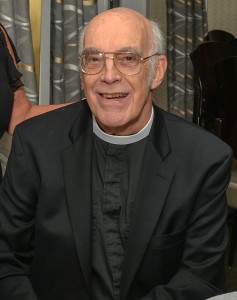 Father Hoag served as the 13th Rector of Christ Church from 1966 to 1998.  He was given the honorary title of Rector Emeritus upon his retirement.

During his tenure many improvements and projects were completed at Christ Church, including the reconfiguration of the Sanctuary to its current “versus populum” or “priest facing the people” design, the installation of the Casavant Organ in the Sanctuary which lasted for 50 years until it was replaced by our new organ, the creation of the Parish Field (formerly a ravine), and overseeing the growth of the parish endowment.  Most significantly Father Hoag oversaw the merger between the Church of the Redeemer in Pelham and Christ Church in Pelham Manor – the combined congregations became what is now known as The Parish of Christ the Redeemer – though most people simply still say Christ Church.

Father Hoag is retired in Florida.  He keeps in touch with the rector and many members from his time at Christ Church.  He has made several trips back to Pelham over the years, most recently for the Parish’s 175th Anniversary in 2018.