Our final day in Jerusalem was free time. Many of us decided that we would visit the Holocaust Museum. I felt that it was essential to go. The State of Israel doesn’t exist without the most horrific genocide in history. The Nazis and their collaborators murdered 6 million Jews. 1.5 million were children. 1.5 million children murdered. The photo on this post is from the entrance to the Children’s Memorial at the museum. This museum is so important and so painful. It makes me sick. It makes me pray. It makes me angry. It makes me sad. It makes me cry. Our last stop in the Museum & Memorial was the Children’s Memorial. Name and age, read in Hebrew and English, in a dark room, all day, all week, all year long. 1.5 million children. God grant them rest and have mercy on us all.

The day concluded with a number of goodbyes. We bid some of our group members goodbye at the Guest House. We bid our guides goodbye as we got on the bus. We bid some of our group goodbye at the airport. 23 of us (our group was 41) have just landed in Newark now. Its Saturday 3:45 AM NY time (10:45 AM in Israel), and I’m signing off on the blog. When we reach gate our group will disperse again. Ten of us are coming to Pelham by bus from the airport. I’ve had the time of my life. I’ve learned how to pray again and in news ways. I’ve made lifelong friends and been to places that will forever form me. I miss my family and I am looking forward to coming home very very soon.

By the time you read this, I will probably be home. I’m “on” this Sunday, September 2. What on earth will I preach about? Our group has a surprise gift for the parish (it is a surprise even to most of the griuo) which I will present. Come to church Sunday. It will make me happy to see you all again.

Jerusalem, my happy home, when shall I come again to thee?

Please forgive any typos. I’ve been blogging from my iPhone. 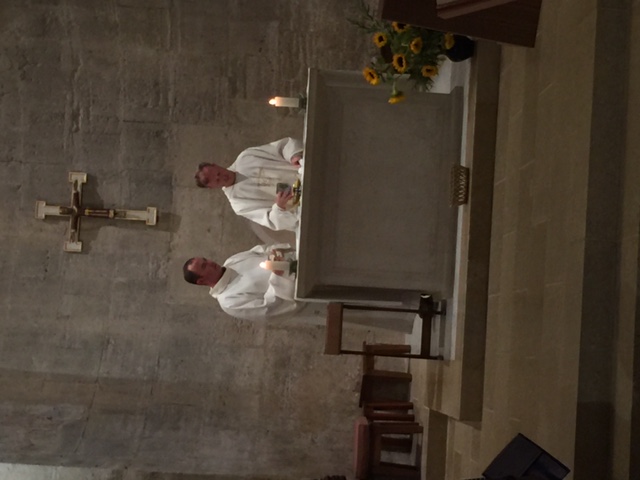 Our day began before dawn. This pilgrimage has featured many early wake ups, but this was the first that was easy. I had gotten plenty of sleep the night before, and we were going back to the Holy Sepulcher. I had been in that church twelve hours earlier to bless and anoint with holy oil a number of gifts in the Annointing Stone. This is the traditional location that Nicodemus and Joseph of Arimethea anointed Jesus’ body with 300 pounds of nard and burial oils. At some point a marble stone was placed on this spot which is at the entrance and exit of the church. For centuries pilgrims, clergy, and the faithful have prayed here and anointed things with oil. I imagine many thousands of pounds of nard and precious oils have been poured out on this stone to sanctify items – a tradition started by Nicodemus and Joseph. The smell overpowers the entire church complex. When you touch the stone, it’s smell sticks to you. It is divine. It is my favorite place in the Holy Land, and I was happy to return to the place where only twelve hours earlier I had poured out half a vial of oil over Holy gifts for my loved ones.

At each station one member of our group read a passage of Scripture while another read prayers. The prayers were different than the ones we use regularly in the Episcopal Church. These were equally moving and I will make sure we use them next year in Lent.

In between stations we sang hymns. Jesus remember me. Were you there. Amazing grace. Singing such sacred songs in the silence of the city will forever be with me. God has given us the gift of music, and when we tap into that gift the angels sometimes join in. They did today in the Holy City. The sound of our voices echoing off of the ancient walls brought with it myriad pilgrims prayers from days gone by.

It is customary to enter the Holy Sepulcher in silence. Our final song finished and we entered the plaza outside the church. Even at this early hour the church is more crowded than most churches, but for the Holy Sepulcher it was “empty”. Perhaps only a few hundred people were praying around that church at 6am. Normally it is thousands.

As we entered the church for the final Stations we passed by the Annointing Stone and a cloud of holiness that clings to the air near it. We prayed these penultimate Stations next to Calvary – the rock itself next to us. We then headed into the Rotunda that houses the Edicule. Our final station was in the small tomb chapel behind the Edicule – this chapel commemorated Joseph of Arimathea and it was the perfect, quite place to finish the devotion. Nobody had spoken out of turn on our entire Stations journey but I heard someone proclaim, “ Oh, I’m so happy we are here for this. I wanted so much to come back.” I silently concurred. The devotion concluded with the blessing of crosses on the altar in this chapel.

We then had some time to wander the church and pray on our own. I went to the Edicule first. As I prayed outside it, joining others with a hand placed on its shell, I noted that there were people inside – I thought it was closed at this hour. Bob and I stood outside waiting to see see what emerged. When the doors opened we saw a priest in Eucharistic vestments. We discovered that it the morning hours the tomb is open for masses – scheduled well in advance I assume – in one language after another. When the priest exited, he was followed by a stream of people. The Edicule is not very spacious. I assumed maybe ten people could fit uncomfortably inside. It must have been a small mass for a select group. Amazingly, the line of people coming out did not stop. 20, 30, 40, 50, 60 people poured out of this small space. When they were finally all out, another priest and a similarly large group (speaking a different language) packed into the space. The idea of being packed that tightly anywhere, even the holiest site in the Christian world, drove me to seek solitude. I made a beeline to the lowest point in the Church – the chapel below Helena’s chapel. I was thrilled to discover it was empty… until I turned around and saw a fellow solitude seeker sitting silently in the shadows. I wouldn’t want to be disturbed if I had been in his space, and so I left him in peace. Outside I met most of the group, and Iyad gave us a snack – falafel – for the walk back to the Guest House.

After a more filling breakfast and coffee (several double espressos as has become my Holy Land custom), we made a trip up tho the Princess Basma Center. This is an Anglican Center for children and they provide a wide variety of therepy and services for disabled children. They are doing the work of saints. Here is link to their website which can provide far better information that I can.

After lunch we left town and went to Emmaus (one of the four possible Emmaus sites). Randy and I vested in a 1000 year old crusader church. Randy celebrated and I preached. It was perhaps the highlight of the entire pilgrimage. My sermon is online here. The echoes are a natural byproduct of a 1000 year old stone church.

Our penultimate stop this day was the Dead Sea. The “real feel” was 120 degrees – it was only 104 but the lowest place on earth is also really humid.. Due to the heat – our trip has featured perfect weather except in the Dead Sea/Jericho area which was very hot – I was not looking forward to it all that much until we actually arrived. Suddenly the kid in me came out when I saw a sign for “Beach”. We quickly changed into bathing suits and walked down to the lowest place on earth. The Dead Sea is 1000 feet deep (you read that right) and it is like nothing else on earth. The water is painfully salty (you can’t get it in you eyes without extreme pain – I know that now), it is also so salty that you can’t help but float. We stood straight up in the water and didn’t go under – it’s so totally awesome. But 30 minutes is enough. After the single best shower of all time I walked a few feet up the shore to “The Lowest Bar on Earth”. There, we took selfies and had passion fruit vodka smoothies. If you ever visit the Dead Sea, you must have a passion fruit vodka smoothie at the “Lowest Bar on Earth”. It was sublime.

Our day concluded with dinner at Iyad’s Home in Jericho. We had wonderful food and exchanged gifts and initial goodbyes. I am ready to go home, I miss my family, and I am grateful to God for this wonderful pilgrimage and the people I am have met.