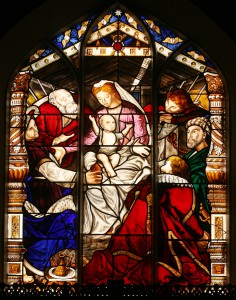 William Jay Bolton (1816-1884)—second son of the Reverend Robert Bolton (1788-1857), a native of Savannah, Georgia, and his English wife Ann Jay (1793-1859), daughter of the celebrated Reverend William Jay of Bath, England (1769-1853)—is generally acknowledged to have been the most gifted member of his multi-talented and prolific family. Together with his elder brother, Robert Bolton, Jr. (1814-1877), and especially his younger brother John (1818-1898), William Jay pioneered the use of stained glass in American Gothic Revival structures—beginning with armorial windows at the Pelham Priory, the family’s home (begun 1838, not long after their arrival in Westchester County from England), and culminating in the extensive, thematically complex cycle of windows at the Church of the Holy Trinity (now St. Ann and the Holy Trinity) in Brooklyn Heights (ca. 1845-1848; one of the windows from this cycle is on permanent display at the Metropolitan Museum of Art).

The Adoration of the Magi (1843) window at Christ Church Pelham holds a unique place in William Jay Bolton’s astonishing six-or-seven-year career as a maker of stained glass (having returned to his native England in 1848, he opened a stained glass studio in Cambridge, but later devoted himself mainly to the Anglican ministry). Almost certainly the earliest figural stained glass window of the Gothic Revival produced in the United States, it is arguably the most personal and inspired of his achievements. He created it not in the context of a formal commission, but as his wholehearted, youthful (he was 27 at this time) contribution to the village church his family had long dreamed of building for the entire community. The simple immediacy of the window’s composition and the tender piety of its sentiment, perfectly reflect the spiritual ideals embodied in the original 65 x 22’ church structure. 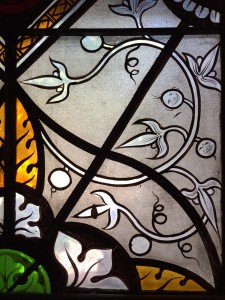 In order fully to appreciate the Adoration of the Magi window designed by William Jay Bolton, we must imagine it above the main altar of the original church, before the 1910 enlargement, which changed the orientation of the nave from north-south to east-west. Entering the church (at least in our mind’s eye) through the door under the bell tower, and observing the two patterned “grisaille” windows (monochrome with areas of brilliant color) on either side of the pews, we get a sense of how all of the Bolton windows were meant to be experienced. The remaining grisaille windows, three of which are now installed in the transept and the other three along the walls of the current nave, would have lined the rectangular space in regular succession (although two of them appear to have been located in the vestibules seen in illustrations of the original building). None of the other stained glass windows now adorning Christ Church would have been present, but the carved Bolton altar rail and pulpit canopy (or one quite similar), and the corbel figures of music-making angels—as well as Bishop Samuel Seabury, recognizable in his current place to the left of the Bolton altar by the bishop’s mitre he holds in both hands—would have been part of the original decoration. The entire effect would have been much simpler and more intimate than what we see today. The church itself would have been much darker, with the Bolton windows providing the only source of daylight. The brilliant, jewel-like colors of the glass that William Jay Bolton had had specially imported from Germany (all for a cost of $30-40!) would have been considerably intensified. 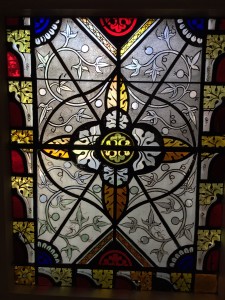 When he designed the Adoration of the Magi window, William Jay Bolton was studying at the National Academy of Design in New York under Samuel F.B. Morse (1791-1872), an American painter now better known as an inventor, who was also the son of a preacher. For most of 1841 and 1842, William Jay had been on a study trip to Europe, including about eighteen months in Italy. The influence of Italian masters such as Raphael and Correggio (Antonio Allegri, 1489-1534) would have been fresh in his mind, as well as his renewed acquaintance with the 16th-century stained glass windows of King’s College Chapel, Cambridge, which he had known and admired since childhood. It is interesting to note that his interpretation of the arrival of the Magi resembles a humble nativity scene set in a manger—albeit one framed by elaborate columns resembling the carved Elizabethan furniture that the Bolton family loved to collect—rather than a formal presentation of the child to magnificent Eastern potentates.

As is typical of William Jay Bolton’s stained glass art, he closely follows the text of the Bible. The story of the Magi is found in the Gospel of Matthew, Chapter 2. They are introduced in verse one as “wise men from the east.” Having announced to King Herod that they were seeking the king of the Jews, and having been guided by a star that they beheld with “exceeding great joy” (verse ten; note the star at the apex of this composition), they at last arrive in verse eleven: “And when they were come into the house, they saw the young child with Mary his mother, and fell down, and worshipped him; and when they had opened their treasures, they presented unto him gifts; gold, and frankincense, and myrrh.” Although William Jay abides by later traditions in which the wise men are three in number (based on the reference to gold, frankincense, and myrrh), he avoids characterizing them as kings (we see splendid robes, one with an ermine border, but no crowns). They gather in worship around the Christ Child and Mary, much as Matthew describes the scene. To the participants named in the Scripture William Jay adds an elderly Joseph looking solicitously on, and a young man peering down from above who may very well be a portrait of himself or another Bolton brother. In this same vein, the Virgin and Child elicit comparisons with a portrait of Ann Jay Bolton and two of her children by the noted English portraitist William Etty (1787-1849). Such blending of family feeling with religious conviction embodies the uniquely warm and heartfelt spirituality of the Boltons of Pelham Priory. 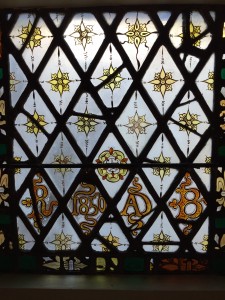 Yet the Boltons’ piety did not exclude much bantering and humor, witnessed in published and unpublished writings, and, right here at Christ Church, in the humorous touches added to some of the grisaille windows (look for smiling and frowning faces, a squirrel and an inchworm among the intertwining vines [windows N5, T4 and T1, respectively, in the diagram on p. xi of Willene B. Clark, The Stained Glass Art of William Jay Bolton, Syracuse University Press, 1992]).

Much research remains to be done on the larger significance of William Jay Bolton’s unassuming yet pioneering masterwork. Considered in relation to the other Bolton family windows and carvings at Christ Church, within the entire oeuvre of William Jay Bolton, and as part of the vanguard of Gothic Revival church decoration in the United States and England, the Adoration of the Magi so familiar to us in our weekly worship will reveal itself in a new light.

Our newest Stained Glass window was installed in 2017!  The Weeks Window was given and dedicated in loving memory of Robert Doughty Weeks Jr.

Before he died in May of 2016, Bob indicated his desire to his family, the Rector, and others that he would like a stained-glass window to replace the weathered and stained plastic window currently there. He commented often that his view from the choir was marred by an out-of-place Lexan window, and he hoped one day to replace it. He envisioned a window that incorporated colors and design elements of the other church windows, and also allowed a view of the enormous piece of ledge rock that is now barely visible through the window. Bob hoped for a window through which the rock could be clearly seen, one inscribed with the words of our Lord Jesus Christ: “On this rock I will build my church.”  Read the full story of the Weeks Window.