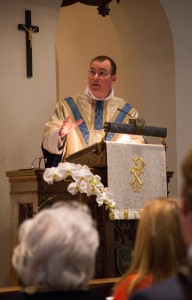 Before coming to Christ Church Father Matt was Rector of the Church of the Good Shepherd in Granite Springs, New York, from 2009 until 2015, and Curate for Liturgy and Education at the Church of Saint Mary the Virgin in Times Square from 2004 until 2009.  He was ordained in 2004 by the Right Rev. Mark Sisk, XV Bishop of New York.

Father Matt enjoys good food, good music, model trains, and golfing (poorly).  He owns a jukebox (45 r.p.m.) which he curates, he assists as an archivist for the Black Crowes at Crowesbase, and he plays acoustic and electric guitar.  The rectory basement features an extensive Lionel (O-Gauge) train layout, built by Father Matt – see his Christmas Train Video here.